So the half marathon has now been and gone and yes I completed with a lot of thanks to my neighbour, Amy McBeth.  I’m not sure I’d have finished without her by my side.  I think this is the 3rd or 4th time that Amy has done the half marathon but she moved to the back of the corals so that she could start with me rather than closer to the front where she could have been.  Because I’d estimated that I’d walk the bulk of it I was actually in the last coral.  The corals were let off in waves of about 2 minutes which meant we didn’t actually start till almost 45 minutes after the official start time.  We maintained a 15 minute mile until mile 9 then I needed to take a potty break so lost 1 minute there.  After that it went downhill so to speak.  My legs just kept seizing and  then it was a matter of completing.  My longest training run/walk had been 9 miles and that had been inside at the gym on a mixture of treadmill and running track.  My longest run outside had been 6.5 miles.  I hadn’t got the mileage in over Christmas that I had hoped due to both Kirsten and I have coughs/colds/flu symptoms.  Anyway I did it and that is something off my bucket list.

If you want to view me crossing the finish line here is a link where you can search on my name: http://arizona.competitor.com/features/finishreplay/  Here is a link that will take you to a page so that you can search on my official results:  http://results.active.com/pages/searchform.jsp?rsID=88865  I think my official time was 3 hours and 23 minutes, 58 seconds which makes it a 15.50 minute mile for those of you trying to work out the maths.

So my next challenge, as some of you will remember and others won’t, is the Tri for the Cure on April 11th.  It is a Sprint Triathlon which means we have a 400 metre swim, 8 mile swim and a 2.25 mile run.  I am scheduled to take part in 2 separate swim clinics to help me with the swimming side of things and I need to get my bike serviced and spend some time getting my backside prepared for the cycling.  Amy McBeth has signed up to join me in this and another friend of mine, Colleen, who John and I know from The Village is also participating.  I’m not certifiably mad just feel I need a little challenge now and then.  Here’s the link if you want to find out more information:  http://www.triforthecureaz.com/index.php

Half Marathon, Health and Fitness, Triathlon |

You may or may not know that I bought myself a new sewing machine on July 4, 2009 with the plan to start trying to sew clothes for Kirsten as she is so tall and skinny.  Well that hasn’t happened yet, but I have got into quilting instead.  I have joined a group both at my local quilting shop, The Olde World Quilt Shoppe (http://www.theoldeworldquiltshoppe.com/owq/?CFID=3901389&CFTOKEN=84347671) and now a second one online called “Year of Schnibbles” that a lovely lady called Sherri is hosting through her blog (http://www.aquiltinglife.blogspot.com/).  The whole basis of the “Year of Schnibbles” is that on the first of the month Sherri will announce on her blog what the next month’s project will be in the way of a “Schnibbles” quilt.  “Schnibbles” quilts have been designed by Carrie Nelson of Miss Rosie’s Quilt Company (http://www.missrosiesquiltco.com/).  I am loving the challenges being thrown at me by joining a quilt club and trying things with fabrics that I definitely would not have tried out on my own.  I have quite a bit of catching up to do with the Year of Schnibbles but here are 2 of my quilts. 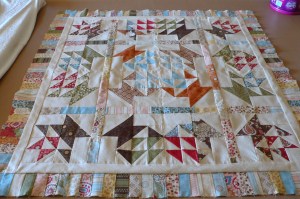 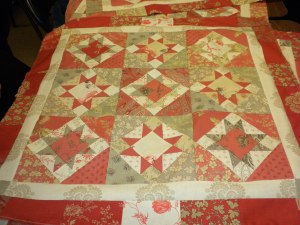 So hear it is.

“Kirsten is a pleasure to have in class.  She plays well with the other children and loves circle time.”

John and I thought that this was a very good first report.  We have to remember she is only 2.5!!

Just a last quick note that John has been creating a new photo gallery just showing pictures of Kirsten. Here is the link: http://gallery.me.com/jwx67

OK back to the Cookie Monster project.  Right next door to where Kirsten goes to preschool there is a scrapbooking store so I thought as we were right there we could pop in.  I asked the shop assistant what they had in the way of sesame street stickers after finding a little plain scrapbook and she showed us a huge array.  Kirsten thought this was wonderful and took 1 of everything off the wall.  I also got a few bits of paper.  I suspect we’re going to go back to the scrapbooking store, or I will today after Quilt Club and pick up another 2 scrapbooks.  That way she can make another 1 for each of the sets of Grandparents as we certainly have enough stickers.

Yesterday afternoon I had to get my car fixed as the tailgate on the Odyssey wasn’t working so Cookie Monster came with us.  The new camera I got for Christmas (compact for my handbag) is being put to work and so far we have pictures of cookie monster watching the bath be filled for bathtime, preparing for cleaning of teeth; visiting Daddy at the office; trying out Skype with Kirsten at the office (just between staff) and waking up with Kirsten this morning.  I’ll have to print them out tomorrow afternoon (Sunday) so we can make the scrapbook although I might start today as I don’t want to have to do everything Sunday afternoon.

Last but not least was swimming on Thursday morning.  I told Kirsten we were going swimming and she said “you come too”.  I told her that Mummy would watch but she would go in the water on her own.  It is exactly 23 months since we started swimming lessons so it is a long time for the 2 of us to have done something together so regularly.  Kirsten then said “Coach Mark”.  He has been a great Coach and worked with Kirsten for the better part of the last year.  Nope not the same Coach either as Mark only works on Wednesdays.  We were starting with Coach Richie.  Kirsten had to line up this time and wait for her coach to come and get her.  There was some clinging and a lot of screaming as Coach took her into the water and I sat down in the spectator gallery (on the other side of the glass) to watch.  It was then a learning curve for both of them as her new coach was also one of the few that had never seen her in the water or worked with her at one time or another.  Although Kirsten screamed a lot of the class she actually did almost everything that was asked of her.  She is now in a “semi-private” class so there should be 2 children but this week at least Kirsten was on her own which I felt was even better as she could get to know her “new” surroundings without too much going on.  I’ll keep you informed on how she progresses.

Last weekend Kirsten had another severe bout of constipation.  I knew something wasn’t right when she woke up during the night and wanted cuddles, but it took until mid-morning to discover what the problem.  She was in severe pain during Sunday and I was trying everything to not have to take her to ER.  Thankfully at about 4pm persistence paid off, but it wasn’t until yesterday, Friday, I could say that the constipation had finally cleared.  I went out and bought Soy milk earlier in the week to see if switching to that instead of cows milk will make a difference.  Until we can fully sort out the constipation we are going to have problems with the potty training.  On that subject as long as I take her to the toilet I’d say 75% of the time she does something but no 2s (sorry for the graphic explanation) is definitely not in the toilet!!

I’ve got my half marathon next Sunday so that will be the next update.  Talk to you all soon.

John and Sigrid’s blog
Create a free website or blog at WordPress.com.